Yes, I know that winter is almost over but that doesn’t mean you can’t plan for next winter! Right now is a great time to buy a new pair of boots for next winter and Lugz has a great special going on!

Lugz introduces its “Snow White” collection! Whether the real “white” stuff touches down by you or not, you can still look fashionable and be comfortable this winter! Since 1993 Lugz has been making great footwear for the entire family, but it just keeps getting better and better. Treat yourself and be ready for whatever weather comes your way. Go to Lugz.com and use Code SWC30 for 30% off! (excludes sale items and cannot be combined with other coupons). For current special offers visit this website HERE.

How awesome are those? I love Lugz and to me having a great pair of white boots is a must in the winter time. You can’t go wrong with these!

If you have been reading my blog for any legnth of time you already know I am a handbag addict. I have so many I could start a couple of stores. I have bags of every size, shape, texture, and color. I LOVE them. However it is possible that yesterday I found a handbag that does it all.

I am hardly ever without my camera and sometimes it gets hard to carry my camera bag + handbag. So when I found Mooli London on Kickstarter I was immediately intrigued. It is much more than a camera bag, it performs double duty by holding your camera equipement and your personal item. You can put your phone, wallet, camera, lenses, tablet, and a lot more in this stylish bag. All I can say is “Take My Money, Please!!!”

The bag comes in 3 colors, brown, red, and black. However they do have an option on the Kickstarter page for you to have a bag designed in your favorite color. I think we all know what I would choose, PINK of course. That beautiful strawberry pink that is all the rage right now. Or maybe a beautiful raspberry like my kitchen gadgets. The possibilities would be endless!

Another intriguing thing about this bag is the fact it is NFC enabled. That means if your bag gets separated from you it can find it’s way home. That is great for me because I am bad about leaving my stuff places. Sigh. One day I will work on that.

Also, if you are a blogger like me and get to travel, this would be a great bag for the airport. You can put everything in this bag and then you won’t need a separate “personal” bag. Making it even easier to board the plane!

This bag will be all you ever need whether you are a photographer or a busy Mom. So run on over and support this awesome company and this AMAZING bag!

Ps. I will be receiving a bag in Nov/Dec to review. When I receive it I will do a full review with personal photos. So be on the lookout 🙂

Princess Of Beverly Hills- The World’s Most Glamorous Dog

Princess of Beverly Hills ™ is a real life Maltipoo, who is creating a buzz on social media.  Adopted as a pup, Princess moves to Beverly Hills and grows up to be an intelligent, compassionate, and talented pooch who lives a pawfect, fairytale-like life. Her trademark pink fur, jewel-encrusted collars, and sparkling accessories appeal to the inner princess in girls of all ages. Her adventures entertain over a quarter of a million fans on social media.

Princess’ owner, Stacey Whitmore, is thrilled to introduce Princess to children and tweens as their newest best friend. DEMDACO ®, the Leawood, Kansas-based design firm, is delighted to introduce this glamorous pooch to its Nat & Jules ® brand of children’s toys and gifts.

Do take the initiative to plan it. Don’t plan the entire thing yourself.

Whether you’re the honor attendant or a family member, it’s never a bad idea to get the bridal shower conversation going (and the earlier the better!). But just because you’re game to coordinate and lead the charge doesn’t mean you have to take it all on yourself. Enlist the other members of the bridal party and even the families of the bride and groom to give input and help out too. The best way to go about it is to get everyone together and ask what each person wants to help with instead of assigning duties. Anyone who is hosting should be included on the invitation as well.

Do organize a theme or group activity. Don’t make the bride uncomfortable.

Having a bridal shower theme or planning out a group activity will make the planning easier, and it’s a talking point to bring together college friends and grandparents. But before you start making plans to have a sex toy demonstration or take everyone bungee jumping, ask the bride if there’s anything they would be uncomfortable with. If it turns out they’re anti-tradition and want to have a get-together that doesn’t include the classic games or gifts, then you should respect that and come up with something they’ll enjoy — even if it isn’t your thing.

Do pick a date early on. Don’t forget to ask the VIPs for their availability.

Even if you’re planning to wait to host the bridal shower until shortly before the wedding, you’re going to want to make sure you pick a time when most, if not everyone, can come. Figuring out multiple schedules can be a lot of back and forth, so it’s best to start early and pick a date way in advance. Depending on where guests live, they may need to make travel plans, but if most people are local, you have more options. It’s possible not everyone will be able to come, but there are at least a few people in the immediate family and the honor attendant who should definitely be there, so their schedules might be the deal breaker.

Do ask the bride for their guest list. Don’t invite anyone who isn’t invited to the wedding.

Instead of starting from scratch, you should ask the bride to help out or make suggestions for the guest list. But before you send out invites, just do a quick double-check that everyone who’s being invited to the bridal shower will also be invited to the wedding to avoid any hurt feelings.

Do give some guidelines for gifts. Don’t make the gift giving too raunchy.

Come up with a theme for the gift giving that ties in with the party. Share the couple’s registry info, but let guests know they don’t have to just stick to that if they have something else in mind – the bride might also love off-registry items, like activities for their honeymoon or gear for all of their hiking adventures. Our only advice here: Remind guests that the shower is an all ages affair, and while something tongue-in-cheek, like an artful karma sutra coffee-table book, will probably go over okay, you may want to avoid anything outright naughty, like sex toys and triple X-rated lingerie (save those fun goodies for the bachelorette party!).

Do send shower invitations Don’t go overboard on the paper.

Once you have all the logistics together, you should definitely send out invitations, even if most of the guests have helped out with planning the bridal shower. If a lot of guests are coming from out of town, the earlier you send them, the better—at least two months before if not earlier; if most people are local, four to six weeks should be just fine. That doesn’t mean you have to go nuts with the invites — those cute ready-made cards available at any card store are great. And you can even go paperless for this one with the help of a graphic designer or an evite service.

Do serve something to nibble on.  Don’t cater an entire meal (unless you want to!).

Having some type of food is a must, whether it’s inspired by breakfast for dinner or a sweets table. Consider catering if you’re throwing a large party, but you could even make some of the main dishes and then supplement with catering additions, or have other guests contribute as a potluck. As long as the party doesn’t cover all of dinnertime, for example, you don’t have to serve a full meal. Light snacks or hors d’oeuvres or a continental breakfast of pastries, fruit and coffee are plenty. Just let guests know on the invite so they’re prepared.

Do have a loose schedule. Don’t make it too detailed or strict.

Keep the momentum rolling by having a general idea of what you’ll do at the beginning, middle and end of the shower. You may need to enlist the help of some other hosts for the gift-giving portion (you’ll need at least two people — one to bring each gift to the bride and another to write down who gave what). Just because you have a plan doesn’t mean you have to control every single second. If The Newlywed Game inspires everyone to share their own hilarious stories, let it roll. But having a plan is helpful in case there’s an unexpected lull in the party.

But before you decide on what to wear, your wardrobe is really dependent on your venue. Backyard barbecue? Intimate country club cocktail party? Beachfront clambake? Once you pick your venue, you can find a dress to fit, but we recommend experimenting with vibrant colors and fun ready-to-wear bridal looks. And if your beauty plan is loose and natural on your wedding day, try wearing a glam bright lip at your rehearsal dinner for a totally different look. The most important thing to remember is that you should stand out in the crowd during your rehearsal dinner, so don’t be afraid to go bold. See below for our favorite of-the-season trends and tips for how you can pull them off at your rehearsal dinner.

Rehearsal Dinner Outfits That Get You Noticed 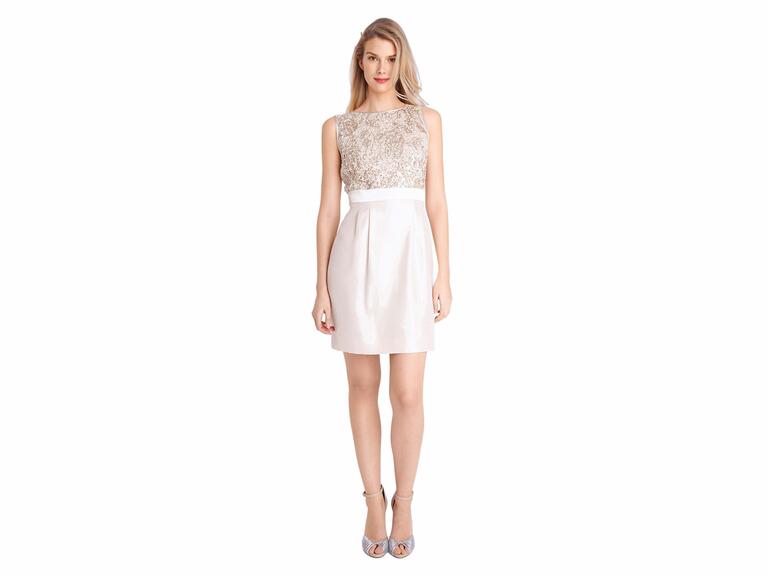 Blush wedding dresses are having a major bridal moment, but can be a departure from your “vision of white.” So instead of breaking from tradition, why not wear a trendy blush dress to your rehearsal dinner? We love how this one has lacy details for a very “mini bridal” feel. Sheath dress, $138, Tahari Arthur S. Levine, LordandTaylor.com 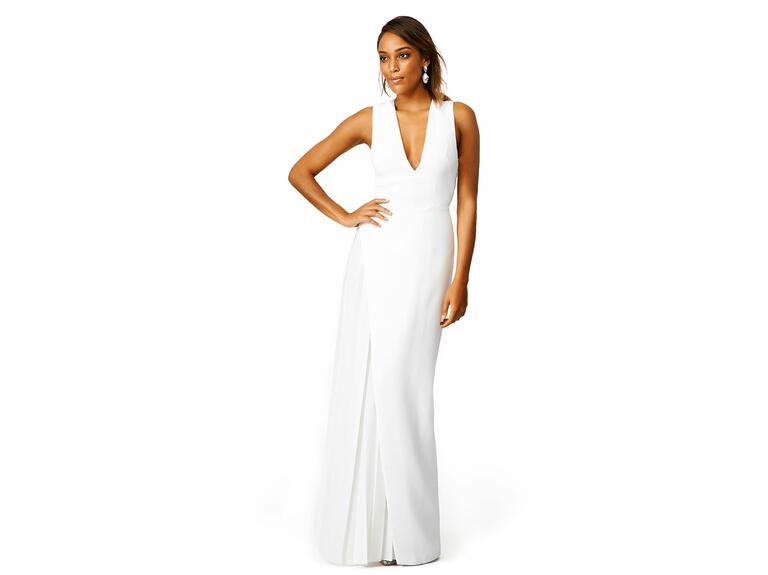 PHOTO BY RENT THE RUNWAY

A plunging neckline was a huge trend on the runways this year, but might be a little too risque for a walk down the aisle. So why not wear this floor-length beauty at your rehearsal dinner? Its deep-V neckline doesn’t cut too low, so you won’t have to worry about showing too much cleavage, and the pleated lining makes the thigh-high slit sexy yet sophisticated. White gown, $95 rental, Camilla and Marc, RenttheRunway.com 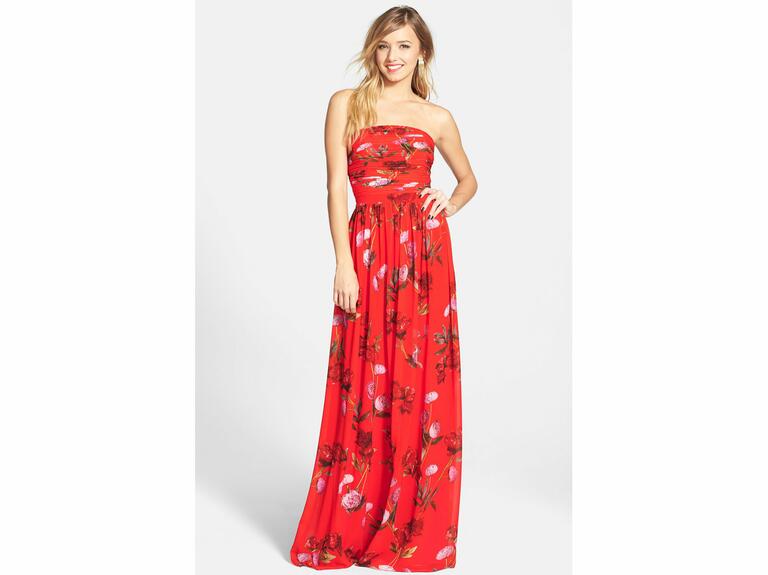 Nothing makes a bride blend in with the crowd like a black cocktail dress. Go polar opposite for your rehearsal dinner with a vibrant red number! This floor-length strapless maxi is perfect for a summer-night party, and you’re guaranteed to still be the center of attention, even if you’re not wearing white. Red dress, $325, Erin Fetherston,Nordstrom.com 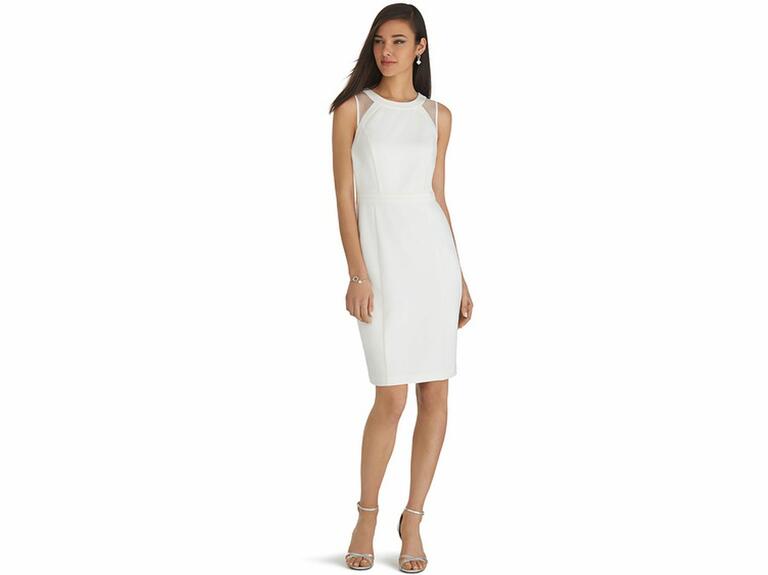 You’ll really feel like a bride when you slip into this simple and elegant shift dress for your rehearsal. The knee length makes it appropriate for your church rehearsal, but the mesh back adds a nontraditional twist. White shift dress, $160, WhiteHouseBlackMarket.com 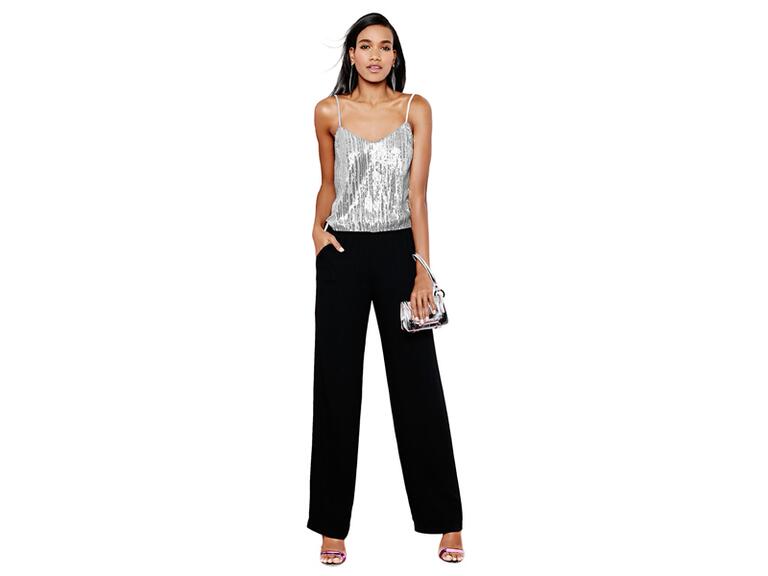 If your wedding dress is more traditional, your rehearsal dinner is the perfect time to wear something totally unique and fun. This sequined jumpsuit is the perfect combination of casual and fancy for a backyard bash or an intimate dinner with friends and family. Sequin romper, $134, LordandTaylor.com